what do you want to do?

Allen Lau shares the how-to for a charming bar cart made of scrap wood. Not only does this new piece of furniture hold alcohol, it stores stemware, adds character to our dining room, and makes happy hour happen more!

What should one do with an old pile of  Ikea mattress support slats weathered by the elements, taking up space in the side yard collecting dirt and harboring critters? Turn it into a bar cart.

Start by detaching all the slats from the ribbon strips and remove any staples. Then create frames for three trays. The slats I had were 2½" x 38" x ¾". I roughly estimated the amount of material needed, keeping in mind to leave some for the vertical supports and some braces. Also, in order to minimize the number of cuts, I decided to keep the length of the slats intact and build the cart trays based on that. So I came up with the following requirements for building each tray:
I used only a miter box saw and some elbow grease to make all the cuts. So the alignment for the frames turned out slightly off in some cases, but weren't too bad. If you have a power saw, I highly recommend using that instead to make more precise cuts. 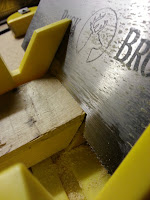 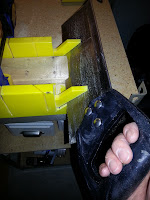 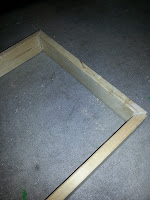 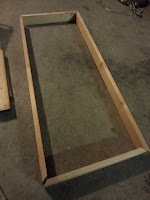 With some wood glue and small finishing nails, assemble the frame of the tray into a rectangle, fitting together the 45° angled cuts. Once you have a rectangular frame, lay the 6 slats down on the frame from edge to edge. Secure the slats to the frame with some wood screws. (I recommend pre-drilling holes for the screws to prevent splintering. But if you don't mind some splintering and like a more rustic look, skip the pre-drilling, or use nails instead of screws.) Place the two 15" slats across the bottom slats, 10" from the edges. Secure to the bottom slats. 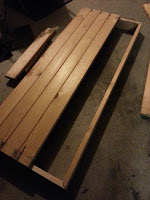 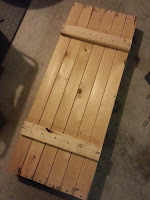 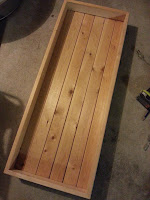 Now, repeat and make two more trays. With three trays done, take a break, go outside, get some fresh air, and spend some time with the family so your spouse doesn't complain that you are neglecting them.

Okay, let's wrap this up. For the vertical supports cut 4 slats to lengths of 36". I decided to lop off a couple inches from the 38" slats so that the cart wouldn't end up too high since the wheels add another couple inches to the height of the cart.

Lay the trays on their sides so that you can place two of the support slats across the three trays. Imagine placing the finished cart in the picture onto its back or front. Secure the slats to the trays using the bottom braces of the trays as guides for the supports. The ends of the braces should line up perpendicular to the vertical slats.

Position the middle tray such that you leave enough room for a standard wine bottle (about 12") to be placed standing up in the tray. In this case, the lower tray bottom to the underside of the tray above is 15¼".

Carefully, flip entire assembly over to the opposite side and repeat with the other two vertical slats. So the cart is basically done. Time to add some reinforcement so that it can hold up all your precious booze. Measure and cut braces to fit from the underside of an upper tray to the top of the tray lip. Place and secure this brace right behind the vertical support slat. Repeat adding this vertical bracing another seven times for a total of eight braces--four for between the top and second trays and four for between the second and bottom trays. 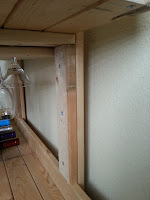 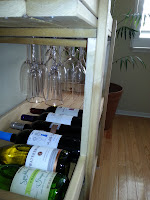 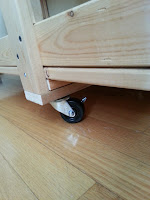 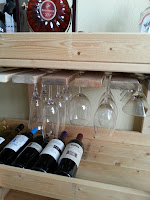 Congratulations! You now have a bar cart made by your very own hands and saved yourself several hundred dollars along the way. 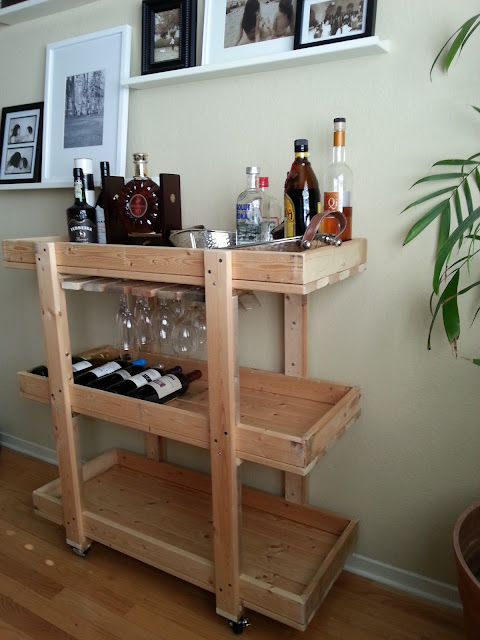 Total cost of this project was about $30 for wood screws and four lockable caster wheels. (Ikea slats were $20 per bundle; I used two bundles here. I'm not counting the cost of these since they were "junk" sitting outside in the yard.)

Total time invested was about one weekend.

You may want to add your own flourishes to the cart. How about adding a hanging rack for glasses or staining the cart your favorite color? Please share your creations.
Posted by AL at 5:43 PM